We are fortunate that our Australian Labradoodles do not tend to suffer from any major health conditions. Of course, any individual dog of any breed could be unfortunate – no dog is immune from disease - but our Australian Labradoodles are generally healthy compared to most. In this article, we discuss the two methods that breeders can use in efforts to minimise the risk of their puppies suffering from genetically inherited conditions.

As breeders, we strive for non-existent, unachievable perfection. In reality, nature has other ideas and there is no such thing as a perfect dog.

If you have done some online research or watched a dog breeding documentary, you probably understand that inbreeding (breeding two related dogs together) tends to increase the likelihood of the offspring suffering from genetically inherited conditions. This is because the related parents are more likely to carry the same affected or carrier genes which ‘double up’ and produce genetically affected puppies. There are two methods that breeders can use in efforts to minimise the risk of their puppies suffering from genetically inherited conditions. These are:

Breeders can screen for a number of conditions by health testing. Some conditions can be tested for genetically with a DNA test but it should be understood from the outset there are relatively few genetic tests compared with the number of potential conditions out there. If the results are used properly, they govern which dogs are paired together to produce a litter and this ensures that the puppies will not be affected for the condition. Different breeders will test for different conditions based on what their breed is prone to. Other conditions cannot be tested for genetically as a DNA test does not yet exist. In some cases, other testing methods are available – for example, hip scoring, elbow scoring and patella testing all involve a veterinary specialist’s opinion based on what they can see on a radiograph, or physically manipulate on the examination table. Currently at Lomond Hills, we screen for hip dysplasia, elbow dysplasia, patella luxation, prcdPRA, vWD, EIC, DM and IC.

We are strong believers that both of these factors are important, however, it is important to understand that these two factors can actually work against each other.

Every time a dog ‘fails’ a health test and is not bred from, it is omitted from the genepool. When we say ‘fail’ – there is no regulatory body that determines this, it is down to each breeder to determine their own ‘cut-off’ – in other words what results they deem to be acceptable and what results they deem to be unacceptable. Different breeders have different ‘comfort levels’ for different reasons. Every time that a dog doesn’t meet the breeder’s standards (which could be for health reasons or conformation or temperament) and is removed from the genepool, the genepool shrinks. When the genepool shrinks, we are left with fewer unrelated dogs in that genepool and that tends to increase the likelihood of inbreeding. As the inbreeding coefficient increases, there is an increased chance of ‘doubling up’ on the same affected or carrier genes, and therefore an increased chance of producing puppies with genetically inherited health conditions. Health testing and inbreeding can become a vicious circle. 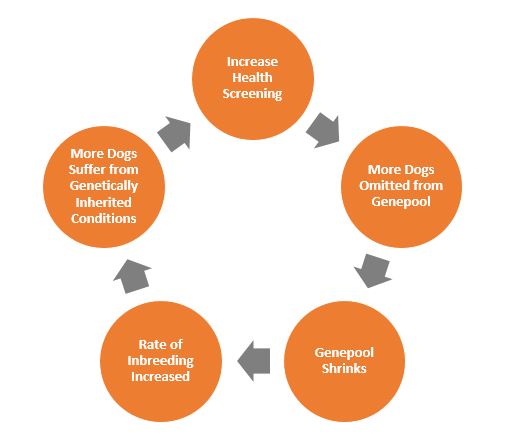 At Lomond Hills, we take a balanced view and never ‘throw the baby out with the bathwater’, so to speak. We test for the conditions that we know are in the Australian Labradoodle genepool that we want to protect our puppies against, but we never throw a breeding dog out of the genepool if they can be bred from safely. For example, it is safe to breed from a dog which carries the gene for Progressive Retinal Atrophy (an eye disease) with a dog which does not carry the same gene as it is genetically impossible for any of the puppies to be affected. When a dog scores an OFA Fair result for hips, we do not omit them from our breeding programme. Some breeders would only breed with OFA Excellent or Good results, but OFA Fair is considered by the OFA to be ‘within normal limits’ and we are not going to shrink the genepool because the word ‘fair’ does not sound as positive as ‘excellent’ or ‘good’. That said, if or when a dog gets a test result which makes it likely their offspring would suffer, they are excluded from our breeding programme and live life as a forever pet.

We do not exclude dogs from our breeding programme or the wider Australian Labradoodle genepool if they produce offspring with minor, temporary or cosmetic conditions which have no significant impact on later life. For example, when a puppy has an umbilical hernia, the vet repairs it at the same time as spey/neuter surgery and the problem is immediately resolved with no ongoing issue. When a puppy has base-narrow canine teeth, the vet carefully removes these teeth at the same time as the spey/neuter surgery which leaves a comfortable, functional mouth and makes space for the permanent canines to erupt normally. We do not remove the parents of puppies with issues such as these from our breeding programme. If we did, we would shrink the genepool for the sake of very minor, temporary or cosmetic conditions and the rate of inbreeding in the Australian Labradoodle genepool would increase. We make an educated compromise; we accept and appropriately treat minor issues, knowing that in so doing we are helping to keep the genepool wide, the inbreeding coefficient low and the risk of producing puppies with more serious conditions which could significantly affect their quality of life minimal.

We are fortunate with Australian Labradoodles that there are no prevalent, major health conditions in the genepool and we will always do our utmost to keep it that way.

Back to all resources